For some reason I thought it would be a good idea to purchase a dishtowel with this William Carlos Williams poem printed on it. Now, every time use towel, I read the poem and think: Who would do that? What an asshole. 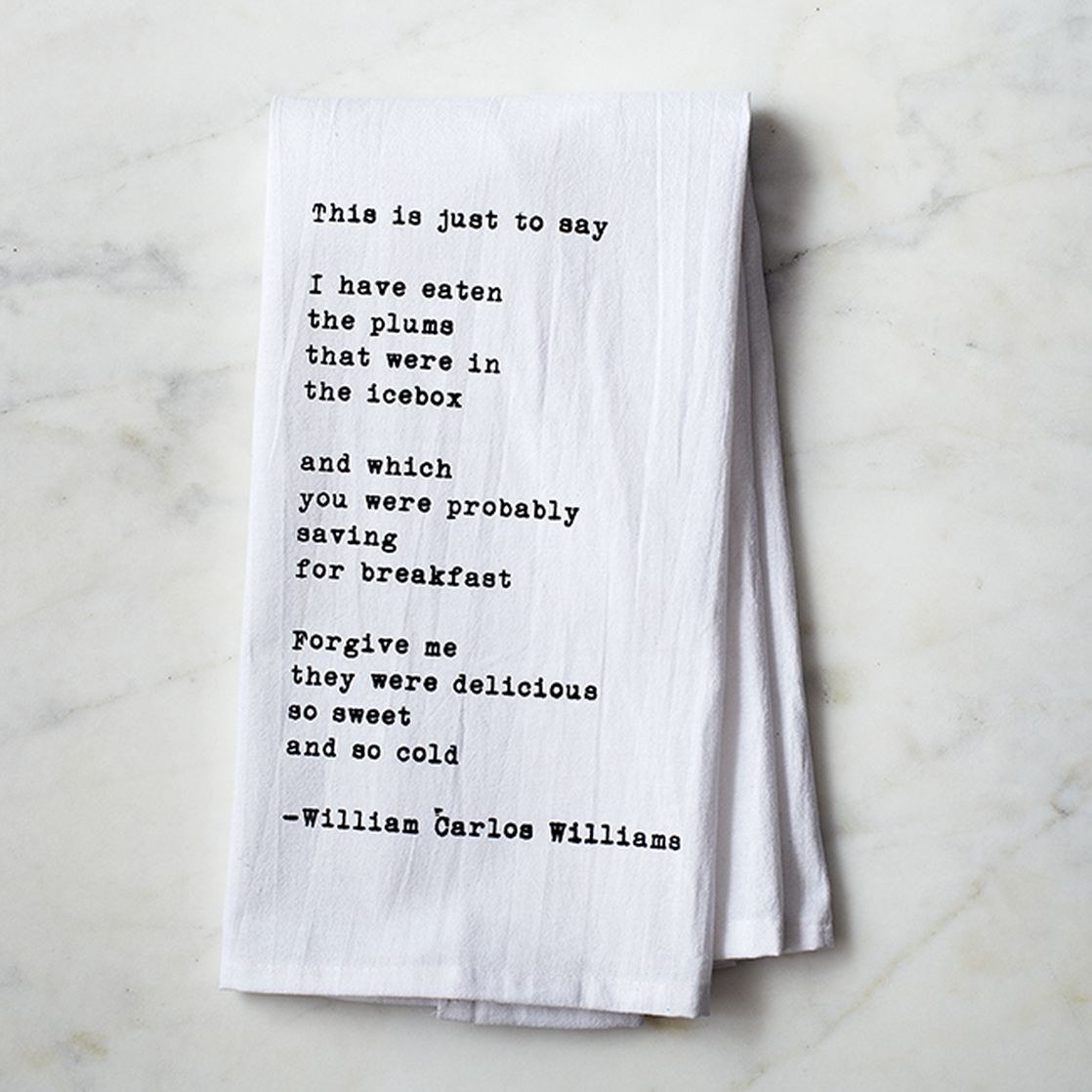 Then, because, when using the towel, I’m inevitably cooking, or doing dishes or wiping counters and am super bored, I invent a story around this poem:

…guy finds plums in icebox (I’ve decided the narrator is a guy – I know, I’m making a  gender assumption here; any one can be an asshole – but for the sake of this blog, I’m going to pretend the narrator is cis-gendered male because I just am.) One morning while his mom/dad/significant other/spouse/roommate is still asleep, our narrator comes downstairs to the kitchen and sees the plums and eats them then leaves a poem/note on the empty plate, which he’s left in the icebox. Empty plate in the icebox – and a note telling you how awesome they were: Asshole. Later that morning, the “you” in the narrative opens the icebox looking for the plums, finds the note and is completely pissed off because the plums are gone and the guy who took them thought he’d exonerated himself by writing a charming, barely apologetic, poem/note…

… let’s say the guy is a doctor (because it’s William Carlos Williams, and he was a doctor, and even though I tell my students never to assume the author is the narrator, it’s tough not to do, you know? And even if W.C.W. made this narrator up, you can’t tell me that at some point in the poet/doctor’s life he hasn’t done something he shouldn’t have), and he’s getting up at 4am to go deliver a baby, and he’s hungry so he eats the plums, but then realizes that the person he lives with was probably saving those plums and will miss them. So he writes a poem/note and leaves it on the empty plate which is no longer in the icebox but is now sitting out on the counter beside the sink, and the parent/roommate/partner/spouse/friend comes downstairs in the morning thinking about those plums and how delicious they will be with a cup of bitter coffee, some almonds and a slice of whole grain toast, only to find they are gone and the whole morning is ruined because the jerk couldn’t leave just one plum. Because, if you read it again, you’ll see “plums” is plural. There was more than one plum. Guy took all the plums. And thinks leaving this poem/note makes it all right. And he left the dish by the sink for you to wash instead of rinsing it and putting it away. Plus, those plums were extra delicious and he had to tell you that because: Asshole…

… let’s say the guy got home very late the night before. He was out drinking, maybe, and was feeling the effects. He’s particularly self-congratulatory about getting home without being pulled over. And he’s hungry, but not so hungry that he needs a sandwich. No, he needs something to take the hunger edge off and when he opens the icebox, there are the plums, which he knows you are saving for the morning. But needs are needs. So he eats them hanging over the sink, staining his good blue oxford with purple drips, which he then takes off and leaves on the back of a chair. Then he leaves a drunken note, which, in the morning he decides to refine because he sees a poem in it (before stumbling off to work in the morning hung-over and wishing now for a vanilla milkshake and a cheeseburger because let’s face it plums do nothing to soak up the gin left in the system).  On his way to work he’s feeling self-congratulatory over that poem – thinking it has publishing potential and forgetting all about that fact that  you were looking forward to eating those plums over the sink in the morning. He’s particularly pleased with, “so sweet/ and so cold” which is nicely alliterative and yet so real. Asshole.

I think it’s that part about how sweet and cold those plums were that sends me over the edge – ok, fine, you’ve stolen the plums, but did you have to be all: And wow were they good! Too bad I ate them all! Guess you’ll have to go to the grocery store now where all the plums will probably be mushy because you actually bought the ones you were saving for breakfast at the farmer’s market yesterday and the farmer’s market only comes around once a week because why should we want fresh produce more often than once a week when the ridiculously expensive Whole Paycheck Foods is five minutes away…

This is not a poem the writer could have just dashed off without thought. He had to work on it. It’s free verse – non metrical. Which, according to The Poetry Foundation here means, “there is not a pattern of stresses” and indeed – at least the way I read it – all of the syllables seem to have the same strength. But count up the syllables and you’ll see that with the exception of “I have eaten” the lines are 5, 2, or 3 syllables. (That “I have eaten” is a little tricksy – ” I have eaten” feels like 3 syllables, but it’s 4. Is that on purpose? It’s the start of the confession – is that supposed to indicate a stumble – maybe a stammer, maybe the narrator is trying to show he’s embarrassed?) – and if you look each line is made up of either 2 or three words – except for the title (that stammer) and the word “saving” – which highlights further the narrator’s guilt in my opinion. This was planned and revised – and the delight of those plums was revisited in that revision – and the glee with which the author remembers them …. argh. I know, I know – Williams was into imagism – it’s all about the red wheelbarrow – it’s all about what’s right there, in front of our very eyes and the profundity of all that. But what he’s showing us here is not plums and an icebox and an empty plate – what he’s showing us is a relationship.

The Poetry Foundation puts this poem in its “marriage & companionship category” – and I have to say that I, for one, would not put up with a breakfast thief – who writes carefully crafted poetry as an apology instead of just exercising some self restraint and leaving the plums which he KNOWS you are looking forward to – unless I really loved that person in that lasting and infuriating way one loves someone with whom you’ve lived a long time. So it’s more than a relationship – which all the kids these days are having – it’s about companionship. It’s about knowing that even if you’re a total asshole, and you eat someone’s breakfast, you’re probably going to be forgiven. Eventually.

It cracks me up that someone thought this poem was charming enough to print it on a kitchen hand towel, and sell it to someone like me who is a sucker for poetry printed on miscellaneous household utilities.

Argh, I find this poem so annoying!

So, why don’t I just get rid of that hand-towel?

Because it’s poetry – that’s why.

One thought on “Sometimes, Poets Are Jerks”